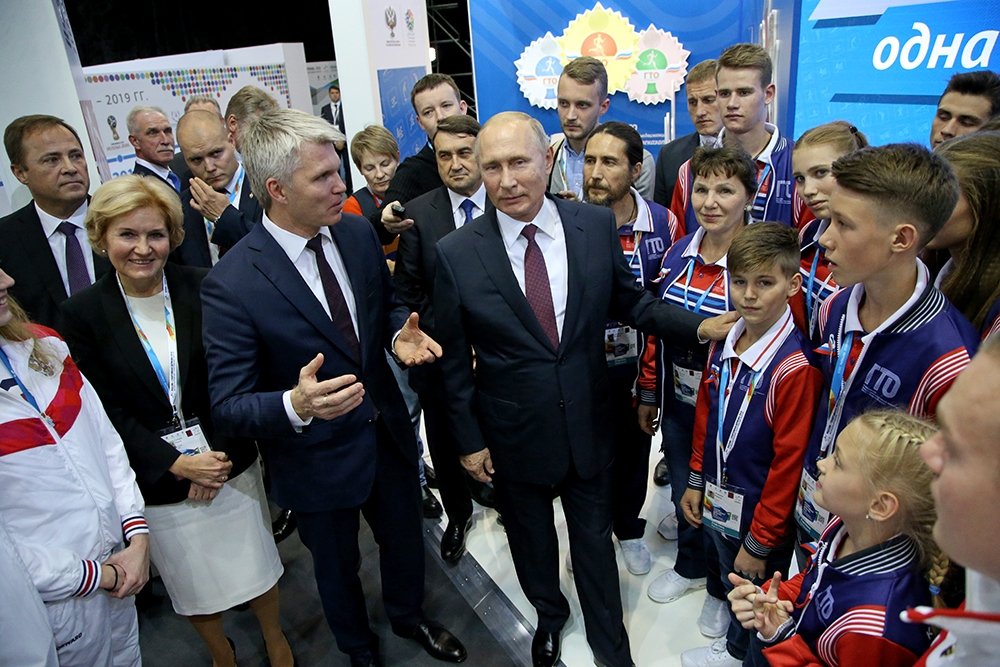 CHRONICLE OF THE FORUM “RUSSIA – COUNTRY OF SPORTS”

Russia – Country of Sports International Sports Forum is the main event in the sports industry and the most authoritative platform in Russia, where key topics in physical culture, professional and mass sports are discussed.

Russia – Country of Sports Forum was established in 2009 by the Decree of the President of Russia No. 863 of July 27, 2009 in order to develop physical culture and sport, international sport cooperation, as well as promoting a healthy lifestyle. In 11 years, 8 forums were held, each of which was remembered for its brightest events, faces, and speeches. But there are several elements inherent in every Forum, including the visit of the Head of State on the day of the Forum, the invariable arrival of iconic Russian and foreign athletes, an intense business and sporting programme, and international exhibitions: “Modern Sport. Innovations and Prospects” and “Sports Literature, Press, Multimedia”.

The scale of the Forum was impressive, such a great event took place for the first time in the history of Russian sports industry. There were 23 governors, 77 heads of executive authorities of Russian Federation subjects in the sphere of physical culture and sport, 69 heads of Russian sport federations, 26 heads of international sport federations, 220 heads of children and youth sport schools, 366 representatives of mass media gathered together on one platform.

The business programme of the Kazan Forum included 6 conferences and 8 round tables with over 2,000 participants. Both national and foreign figures of physical culture and sport took part in the business events, among them 5 corresponding members of various academies of sciences, more than 60 doctors of sciences, professors, 8 representatives of international public and sport entities including International Olympic Committee.

During the forum 5 competitions of the All-Russian level were held with more than 1.6 thousand athletes. The All-Russian wheelchair basketball competition had a special social significance.

In 2010, the forum was held from July 29 to August 1, 2010 in Moscow’s Luzhniki Olympic Sports Complex. The motto of the Forum was “Russia with its eyes fixed on the future!” It was attended by 3,500 people, including representatives of 36 foreign countries; sports delegations from all 83 regions of the Russian Federation; 8 heads of Russian regions; 22 heads of international sports federations and organizations; 35 heads of executive authorities of Russian regions in the field of physical culture and sports.

A special feature of the Forum was celebrating the 30th anniversary of the XXII Olympic Games in Moscow in 1980. A memorial sign dedicated to the 1980 Summer Olympics was unveiled on Prestige Avenue in Moscow’s Luzhniki Sports Complex.

Russia – Country of Sports International Sports Forum was held from September 8th to 11th 2011 in the city of Saransk.

Its programme has been seriously adjusted because of the plane crash that killed athletes of the Lokomotiv ice hockey club. By the organizing committee’s decision, the business programme, originally designed for four days, was reduced to two, all ceremonies were canceled.

Despite that, as a result of the forum, an agreement on cooperation between the Republic of Mordovia and the Russian Olympic University was concluded. There were also signed agreements between the Ministry of sport, tourism and youth policy of the Russian Federation and heads of the subjects of the Russian Federation on granting subsidies to support sports organizations that train the sports reserve for national teams of the country. Several major events took place as part of the forum, including the III International Sports Film Festival opening.

In 2012, from July 4 to 5, Russia – Country of Sports International Sports Forum was held in Yakutsk. The first celebration was the opening of the new Triumph sports training centre. In addition, during the two days of the forum, three more major sports facilities were opened in Yakutsk: the Vasily Manchaary Modun Republican Centre of National Sports (second phase), the Dokhsun specialised indoor football arena, and the Cholbon Olympic-type swimming pool.

Apart from the annual Sports Literature, Press, Multimedia Exhibition, the Forum also hosted the exposition titled Game Traditions of Nations – the Cultural Basis of Russian Sport organized by the Central Museum of Physical Culture and Sports of the Ministry of Sports of Russia.

On July 5, 2012 plenary session “International sports competitions for children and youth as a factor of sports movement development and a basis of interethnic peace and harmony” was held.

The forum was attended by members of the Federation Council, State Duma deputies, representatives of UNESCO, Russian Ministry of Sport, heads of regional executive authorities, people in business, scientists, representatives of sports federations, public organizations, as well as coaches and athletes.

In 2014, Russia – Country of Sports International Sports Forum was held in Chuvashia from 9 to 11 October. For the first time in history, Cheboksary became the sports capital of Russia and a place to demonstrate the information, scientific, technical, intellectual, financial resources, and investment attractiveness of the country’s sports infrastructure. The event brought together about 3,000 people representing 20 countries, governors, ministers, government representatives, heads of all regional executive authorities in physical education and sport, representatives of public organizations, presidents of international organizations. Russian President Vladimir Putin was the chief guest of the Forum.

The event also hosted Russia’s first International Walking Day, which was attended by more than 25,000 Cheboksars and guests of the capital. 10,000 people participated in Morning Workout with a Star.

In 2016, the sixth Russia – Country of Sports International Forum was held in the Vladimir region, on the territory of the sports resort “Dobrograd” from 10 to 13 October.

In addition to the business programme, the forum events included bright events with the heads of ministries and agencies from different regions of our country. For example, under the auspices of ANO Russia – Country of Sports Forum, there was held a mini-football tournament titled Ministries Cup, which was attended by representatives of executive authorities in physical culture and sport in Russia’s regions. The spectacular tournament was an excellent example of promoting healthy lifestyles and physical activity, promoting unity, and social cohesion.

In 2018, the VII International Sports Forum was held from 10 to 12 October in Ulyanovsk and gathered: 3,000 representatives of the sphere of sports, 83 subjects of the Russian Federation, 8 regional governors.

Some of the main topics of the Forum were the following: the creation of complex conditions for increasing accessibility, the attractiveness of mass sport and competitiveness of Russian athletes, implementation of public-private partnership mechanism in sport, etc.

Also, in the framework of the Forum, two exhibitions were organized: “Modern Sport. Innovations and Prospects” and “Sports Literature, Press, Multimedia”. What made the press exhibition unique was that books, magazines, newspapers, and films about sports, healthy lifestyles, nutrition, physiology for 2017-2018 – over 2,000 titles in total – were collected at one venue.

Nine agreements were signed as a result of the 7th Russia – Country of Sports International Sports Forum. Federal and regional authorities, institutions, organizations, and federations agreed on cooperation and interaction in the development of physical culture and sports. Thus, former Minister of Sports of Russia Pavel Kolobkov signed agreements with the heads of republics of Mordovia, Mari El, Murmansk, and Chuvashia. In addition, JSC Northern Caucasus Resorts and the Russian Snowboard Federation have agreed on a partnership to develop active sports at the Arkhyz, Elbrus, and Veduchi all-season complexes.

On Ulyanovsk Cathedral Square, the first-ever TAFISA World Festival of Martial Arts was presented (100 countries participating, each representing their own kind of martial arts). 300 students performed at the GTO Festival: 14 gold marks of excellence were awarded to residents of Ulyanovsk, and 6 representatives of the Volga Federal District were given the status of ‘GTO Ambassador’, whose task is to promote healthy lifestyle and sports in the regions of the country.

The 2019 Forum was held in Nizhny Novgorod on October 10 and 11 and gathered over 2,000 business program participants. In total, the organizers issued 4,486 accreditations. The business programme included 30 different events, including a plenary session, 17 round tables and 8 panel discussions.

During the Forum 10 agreements were signed. The speakers of the Forum were such renowned athletes as Nikolay Valuyev, Alexey Yagudin, Svetlana Zhurova, Sofia Velikaya, Natalia Ischenko, and many others.

More than 5,000 people took part in the mass exercise conducted by the famous athletes: 4,000 filled the bowl of Nizhny Novgorod Stadium, and 1,000 joined them at other venues. The first-ever European Skateboarding Championship and several other competitions were held as part of the forum.